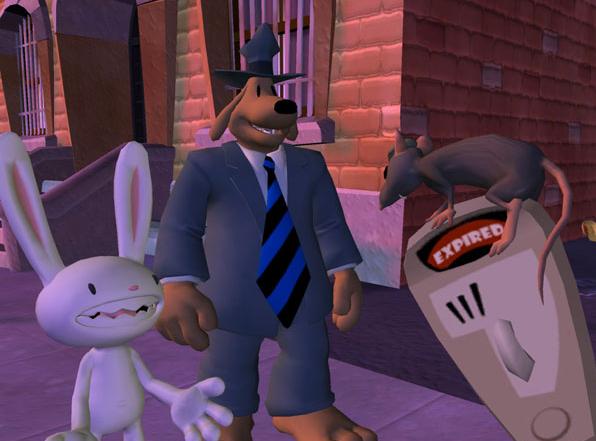 These kind of games have been abandoned as a viable genre. Monkey Island 4 was the last great (if you can call it great - it used the keyboard more than the mouse) adventure game released by Lucas Arts….all the way back in the year 2000. So for seven years the world has needed a fresh adventure game. Who stepped up to the plate? Telltale Games. Building on the success of Lucas Arts' old Sam & Max adventure game, Telltale Games built and released episodic Sam & Max adventure games through GameTap (a monthly PC game subscription service). A friend of mine lets me use his secondary account, and I’ve been gladly enjoying Sam & Max for the last six months. They’ve completed the “first season” of the game (6 games) and are now offering it for sale at their online store. To be honest, Sam & Max is the ONLY PC game I’ve been playing in the last six months. None of the rest have held my attention (or been as entertaining).

Here’s a brief rundown on how I’d score this game if I was reviewing for an online game site:

Graphics: 5/10 The game doesn’t push my GPU hard at all. However, it’s a cartoony looking game with 3D graphics and nicely modeled characters. If it got much more graphically intensive, it wouldn’t have the comic feel that it should. You should be able to run this game on just about any PC you could have bought in the last 4-5 years.

Replayability: 4/10 Once again - this isn’t what adventure games are about. You may replay the game once every few years. I tend to explore every aspect of an adventure game the first time through, so replaying is done more for nostalgia sake than anything else.

Sound: 10/10 The voice acting and ambient music are excellent and really contribute to the feel of the game. The Sam & Max voice actors remind me of the old cartoon that was being produced years ago. So yes…this is a “talkie” :)

Humor: 8/10 The humor in this one (and most adventure games) is very dry. My humor is the same, so I found the games to be pretty funny. At times, the jokes and dialogue just didn’t tickle my funny bone - but they made my wife laugh. Good stuff.

Challenge: 7.5/10 This is one area where I was a bit disappointed. The old Lucas Arts adventure games many times had you combining different items in your inventory to do things (sometimes multiple items). These games didn’t do that at all. To top it off, each game generally had a similar premise - Find out problem, get tool from the inconvenience store, solve problem. Not that this was a totally bad thing - but a little more interactivity with the items in the inventory would have been appreciated. At other times, the puzzle completely stumped me and I ended up cheating (yeah I know…don’t say it). I didn’t ever get that same feeling that I got when playing the first couple Monkey Island games when I’d solve some rediculous puzzle using multiple combined items and timing my mouse clicks right. The game was still rewarding though.

Worthy of purchase: 11/10. If you’ve ever enjoyed adventure games, you owe it to yourself to pick this game up and play through it (all 6 episodes). I’m not advertising for TellTale here - but I think they’ve done the Sam & Max franchise justice.

If you’re interested in purchasing the entire series, the TellTale store has it. You might also think about getting a 3 month subscription (or longer) to GameTap. It’s a pretty neat service and has alot of good games to pick from besides the Sam & Max Series.